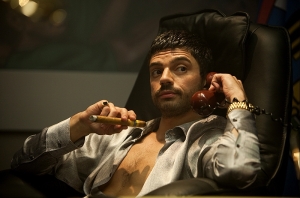 Every actor has that role which would seemingly be impossible to understand. For British actor Dominic Cooper that would be playing Saddam Hussein’s sadistic son Uday.
Cooper portrayed the eldest son of the Iraqi leader for the upcoming film “The Devil’s Double” and admits to PopcornBiz that he prepared for the part “with difficulty.”
“The man was a monster, a psychopath,” he says, speaking at the press day of his new film “Tamara Drewe.”
“It was terrifying.”
Looking into the damage the Iraqi heir-apparent caused in his own country was incredibly difficult. Uday and his younger brother Qusay had a reign of terror that went unchecked in their country.
“He was above the law,” says Cooper. “There was nothing stopping him. He killed and raped and maimed.”
“He was the most hideous man I have ever done any research on.”
Yet somehow, Cooper had to find a way to identify with this character. At one point, he resorted to taking advice from the film’s director, Lee Tamahori, about how this would be possible.
“I want to bring a certain amount of myself to the characters. Most actors do,” says Cooper. “You want to make a connection to a certain part in you.”
This was difficult with Uday Hussein.
“I needed help identifying with someone I ultimately hated,” he adds. ” And I had to understand the concept of why he was the man he was.”
To make matters worse. Cooper had to play two characters. Both Uday and his sympathetic body double around whom the story is told.
“And there’s a lot of pressure to get it right because he affected so many people’s lives so horrendously,” Cooper says.
In the end, he found his Uday, and he promises a chilling film.
“It’s a harrowing story,” says Cooper. “But ultimately it’s a gangster film set in a lawless environment.